The Joy of One-Button Games

This week: This time, I think about how even one-button games can show a high entertainment rating when the conditions for flow are met.

Recently, a colleague installed a very simple game on the Apple TV connected to the large monitor standing in our meeting room: Jump Drive. During the gameplay, players are challenged to navigate a constantly forward flying star ship through the map that features moving obstacles. At first, the obstacles challenged us with simple movement patterns. Over time, however, the patterns and amount of obstacles got more complex thus achieving a significant challenge. Ultimately, the goal of the game is to collect purple diamonds that are used to unlock new ships or new challenges.

Although the gameplay might sound relatively complex, it remains very simple as a user can merely activate the ship’s jump drive that rapidly propels it forward by pressing a button on the Apple TV remote control. Thus, players are challenged to time the activation well in order to gather the maximum amount of points without colliding with an obstacle. Also, this very limited gameplay already shows high flow inducing properties as players are constantly facing new challenges, receive immediate feedback and follow clear rules. As a result, this little game achieves a high entertainment value.

Naturally, Jump Drive is not a game that can be played over a longer period but it can cause a helpful distraction that increases one’s creativity during stressful or cognitive demanding times at work. Also, as we mostly play this game together with a couple of colleagues, a certain degree of competition and excitement arises. We are cheering for the active player when they have a run or try to find out who can survive the longest.

Ultimately, the simple computer game Jump Drive demonstrates the importance of flow inducing properties as this state of mind even turns a One-Button Game into a very exciting activity.

This week: This time, I think about how computer games can inspire and give us hope which especially is helpful during rough times in our normal lifes.

Computer games, like any other medium, can inspire users and give them hope to believe in themselves. This can especially be helpful when they go through a rough time in their real lifes and need some motivation to continue finding a solution. However, in contrast to music or movies that only reach a listener or viewer in a direct and emotional way, computer games can also inspire players by challenging them to overcome dire situations or even save the entire world. Thus, games provide an incentive to actively take part in a meaningful process that often is much greater than the player’s role.

For instance, the games of the Mass Effect series put the player into the role of a star ship’s commander who is sent through the Milky Way galaxy to stop an aggressor from eradicating all organic civilizations. During this adventurous journey, the player often has to make important decisions that affect and change the game’s narration. In addition, the player meets a lot of virtual inhabitants of the galaxy that ask for help and thank the player in a very emotional way. As a result, the player not only changes the lifes of many others, but can also save all civilized life in the galaxy.

By playing a central role in such a meaningful process, players often start to feel powerful as they can change the world when they put enough effort into the gameplay. This motivating feeling is even enhanced as computer games induce flow by providing clear goals, immediate feedback and a constant stream of new challenges that increase in difficulty. In the end, players can get into the mood that anything is possible and nothing can stop them. This mood ultimately can give them hope to be able to solve their real problems and/or inspire them to tackle the problems in a very energic way or with a new approach.

This week: This time, I think about the way how optional goals are implemented and advertised inside of a computer game.

Computer games often provide additional goals to encourage players to carefully explore the game world instead of simply following the main story line. The optional goals can range from simple collection goals requiring players to find special tokens in the game world to fully fledged side missions telling a unique story. Non-mandatory goals additionally increase a game’s replayability as players might have missed some of them thus experiencing a different story or discovering new and special places during a second playthrough.

However, optional goals are difficult to implement from a game design perspective as they are intended to surprise a player and inspire them to thoroughly explore the game world. On the other hand, optional goals also have a high chance of being overlooked by players even during a second playthrough as they need to be hidden in the game world. As a result, some hidden goals are rarely seen by players or players are not aware that a particular non-mandatory goal exists. 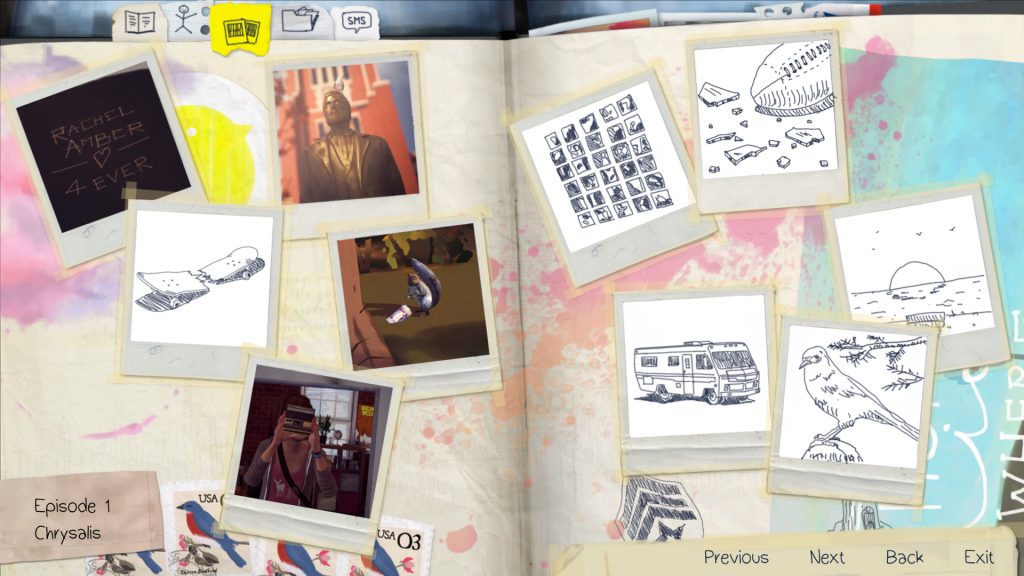 Optional goals (photos to take) in „Life Is Strange“

Therefore, game designers often implement achievements or other summary screens indicating a player’s progress towards having discovered all hidden game elements. While this approach guides players and motivates them to revisit specific parts of the game, it also reduces a bit the optional aspect of those goals as they suddenly receive a higher value. In addition, players might feel discouraged when they realize that they overlooked something and can not complete the game to 100 percent. Moreover, by implementing a collection screen a player can unlock over time, the surprising aspect of discovering something unexpected might be lost as well.

In the end, it is very difficult to find the right balance between indicating the existence of potential goals and simply surprising players. Personally, I would prefer to have the chance to be surprised instead of being aware of optional gameplay elements as this makes them more special and turns them into true secrets.

Is it too late, already?

This week: This time, I think about the ongoing climate change and how its effects become more and more visible.

More than two years ago, I was celebrating that the Paris Agreement was adopted by all of the 196 UNFCCC member parties. Eleven months later, the Paris Agreement entered into force after being ratified by 55 countries that account for at least 55% of global emissions. Both events set a strong signal to globally act on climate change by reducing CO2 emissions and trying to limit the global temperature raise to well below 2°C on average.

Now, more than a year later, I am more concerned than ever before that it might be too late, already. Personally, I get the impression that, although many people are speaking of the climate change, no one really takes action against it. Furthermore, I more and more start to experience it myself as I see strong changes in my region’s climate. Currently, at the end of December and beginning of January, we are experiencing temperatures of around 10°C in Germany. Some years ago, temperatures were around or even below freezing for several weeks. In addition, we also experienced the first strong storm of the year that brought a lot of rain which potentially will cause some floods…

The effects of an ongoing climate change are even more drastic in Arctic regions which are especially vulnerable for the a temperature raise. Last year, as I travelled to Iceland, I could see how far the old glaciers have retreated from their maximum extend. In addition, the decline of the glacier mass starts to increase in speed thus revealing more dark soil which, in the end, even contributes to the temperature raise as it heats up in the sunlight instead of reflectng it.

In general, the changes in the seasonal global climate strongly indicate the ongoing climate change that comes along with very strong weather phenomena. It is time that we start to act now before it is too late. Maybe we still have a chance to preserve this planet for future generations.

Also, it is very important to raise the global awareness and to demonstrate the effects of an uncontrolled climate change. This could be done with computer games that visualize the effects and hence make it easier to understand what currently is happening with our climate.

We finally need to wake up.