This week: This time, I think about how realistic racing simulations can improve a player’s driving skills but also increase the awareness for potential risks and dangers at the same time.

In #120, I discussed the effects of playing racing simulations which resulted in an alternation of my perception of speed and an improvement of my spatial attention as well as reaction time. Furthermore, racing simulations, in case they are played with a force feedback steering wheel and pedals, share similar demands with real world driving, thus training a player’s car control knowledge which easily can be transferred from the virtual environment to the real world. In sum, racing simulations improved all my skills that are relevant for car driving thus helping me to become a better and safer driver.

However, racing simulations also demonstrated me the risks and dangers of driving cars at their limits and showed me the human limits. For instance, trying to recover a car that started to oscillate at speeds exceeding 200km/h by using only a single hand on the steering wheel is a very challenging or, depending on the car’s characteristics, even impossible task. Similarly, driving very close behind a different car might result in good opportunities to overtake the car ahead in a racing scenario, but it also exponentially increases the risk of colliding with the other vehicle. In addition, it applies some pressure on the driver that is being chased, which of course is wanted in a racing scenario, but causes an unnecessary safety risk on public roads.

With those experiences made in the safe environment of a racing simulation, I feel much better prepared for potential situations that might arise while driving in the real world. Unfortunately, the knowledge gained by perfoming virtual racing on a frequent basis resulted in a feeling of precariousness when I drive on public roads, too. Frequently, I see other drivers with only two fingers on the steering wheel or have to endure a car that drives only a few meters behind me. Of course, there always is the potential that the drivers possess well advanced driving skills, but chances are high that those people are not able to correctly react to critical situations thus creating an unnecessary risk. In addition, even when they would have well trained driving skills, then this behavior still results in an increased chance of causing an accident as they can not predict what other drivers do or if there is a bump in the roads that upsets the car. Finally, having advanced driving skills would also result in a behavior that reduces risks to a tolerable minimum.

In the end, computer games create effective training environments that can greatly improve our skills but also demonstrate risks in a safe environment. It is time that we start to use them on a more frequent basis in education to achieve better learning outcomes.

This week: This time, I think about the rewarding moments of playing realistic open world simulation game.

Several years ago, I used to play Microsoft Flight Simulator X Professional on a frequent basis. Aside from doing short duration flights between two airports that are only a few flight minutes away from each other, I also did some long duration flights in order to reach interesting destinations such as Iceland or Spitzbergen.

Those virtual journeys, I mostly used Berlin Tegel as my starting point, took me several days as I splitted them into shorter, about 1 hour long flights. However, this was only possible until I eventually reached a point from which on only open water separated me from my destinations thus requiring me to do several hour long flights in order to complete my goals.

Surprisingly, although nothing special happened during those long flights, it was still very entertaining as it gave me the challenge of managing the flights and communicating with the simulated Air Traffic Control while completing other tasks such as cooking, eating or cleaning. Furthermore, the real-time flights provided me with a very rewarding experience as it really felt as if I would have accomplished something meaningful after crossing the open water between the Faroe Islands and Iceland.

Unfortunately, since those days of long duration flights in Flight Simulator X, no other simulation game really provided me with a similar opportunity for such ambitious projects. This is mostly due to the fact that the scope of the games is too limited or the simulation itself is not immersive enough to motivate me to attempt those endeavors. However, Kerbal Space Program makes a slight exception as flying to the Mun in real time could be one of those challenging endeavors. The only problem is that, in contrast to my Flight Simulator X flights, there will be absolutely nothing to do between the moment of finishing the Trans-Munar-Injection burn and beginning the Orbit-Insertion burn.

Hopefully, the ultra-realistic simulation games will experience a new boom, soon, and provide fans with a huge and open virtual world they can explore unrestricted and in an authentic way. Personnally, I miss those games a lot!

This week: This time, I think about Minecraft’s game mechanics that provide players with the impression of being a part of a living virtual world.

Minecraft provides players with unique and vivid worlds they can freely explore and change. Furthermore, the open world game has no clear goals players need to complete in order to progress with the game. Instead, players are unrestricted and can do what they want as soon as they enter a Minecraft world. As a result, the most common things players do are exploring the world, digging deep into the earth to find caves full of valuable resources or building more or less ambitious projects such as large houses, huge temples or even colorful towns.

The vividness of a Minecraft world is achieved with various types of digital creatures that inhabit the virtual environments. Some of them are friendly, others are neutral or even hostile and try to kill the players once they get too close to those creatures. Also, a few of the creatures can be tamed and subsequently start to follow the players everywhere they go.

A Creeper in Minecraft.

Moreover, the virtual environment can not only be changed by the players, but also by some of the virtual creatures. Creepers, withers as well as ghasts can cause explosions that destroy parts of the landscape when they attack the players and nethermen can even pick up arbitrary blocks in order to move them around thus slowly changing the virtual worlds over time.

That way, Minecraft gives players the impression of being a part of a living world that reacts on them and even changes as time progresses. However, the changing world game mechanic also has a few downsides as it requires players who focus on building ambitious projects to be extra careful to avoid causing an explosion and to frequently check the environment if endermen have moved some blocks away that were an integral part of a particular building. As a result of this, some players turn off this game mechanic in order to be able to build spectacular projects that will never be changed by the game itself.

In the end, Minecraft’s approach of creating a living virtual world is especially fascinating due to the automatically changing terrain which is a feature only a few games have implemented so far. Personally, I very much enjoy this feature as it provides me with the feeling of being able to witness some kind of erosion which is an event I would like to see more frequently in open world games.

Early Access: Not all changes are great for everyone

This week: This time, I think about one of the major risks when it comes to playing an Early Access version of a computer game: the game can get changed in a way that does not match the players‘ interests.

Playing an Early Access version of a computer game can provide a gameplay experience that is completely different from the gameplay of a final release version. This is mostly due to the fact that those computer games are still in development and hence periodically receive new game mechanics and balance changes. Depending on the features that are added with a particular update, the whole gameplay experience of a game might change and provide players with new ways of interacting with the game and/or new challenges to overcome. As a result, players of Early Access games often experience a higher playtime than players of a final release version.

However, major development steps might also negatively affect the gameplay experience of long-term players who are playing the game since the beginning of its Early Access phase. This mostly is the case when new game mechanics which drastically change a particular aspect of the game are added. 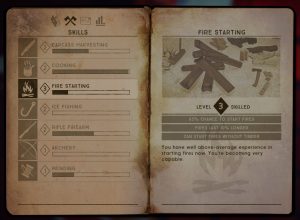 Skills in The Long Dark

For instance, before the „survival“ skills were implemented in The Long Dark, players just increased an activity’s chances of success each time they performed this activity. This simplistic experience system gave players the feeling of self-improvement without affecting the gameplay too much. With the new skill system in place, players are gaining experience for various skills that unlock powerful abilities once a new skill level is reached. Such a skill system is a common game mechanic in many role-playing games (RPG) that focus a lot on the development and specialization of a player’s avatar. However, not all players enjoy the aspect of experience-based character advancements and highly preferred the simplistic approach. As a result of this, the implementation of the new system has negatively impacted the gameplay experience of some seasoned players.

In the end, that is a risk players must accept when they start to play an Early Access version of a computer game. Depending on the stage of the development, major game mechanics and general design ideas might have not been implemented yet thus providing a different experience than ultimately intended by the developers. However, although it is impossible to satisfy every player type, game developers need to listen to their community when they launch an Early Access version and sometimes even rethink certain design choices. Ultimately, it is the developer’s game and hence they have the final call in which direction the development goes.