This week: I read the book „What video games have to teach us about learning and literacy“ [1]. James Paul Gee compares the ways we’re learning while we’re playing video games with the ways school  teaching us math and science. Finally he points out 36 learning principles provided by video games.
This „finding of the week“ offers some critical thoughts about the use of gamification to create situations in which flow can happen.

In his book, Gee mentions flow [4] as one of the key concepts to keep computer game players engaged and challenged. McGonigal [2] transfers the video game approach of flow into the real-world and points out the advantage of it in making the real-world more engaging. This is what gamification [3] tries to achieve by adding game elements to non-gaming environments.
According to Csikszentmihalyi [4], a potential of flow can be added to daily-life tasks by restructuring them. This can be done by adding new (personal) goals to achieve while performing a particular task.

Computer games often provide some achievements as well. The player has to fulfill some additional requirements to earn an achievement. This can be a special constraint to the regular game play: Normally the player has to gather 10 points within a certain amount of time. But if the player likes to earn an achievement, he has to gather 15 points within the same amount of time. Thus the game challenges the player with an additional goal and the task of gathering points becomes more engaging.

However the achievement system is more popular in multiplayer games: Players can compare their earned achievements and compete against each other. The aspect of competition enhances the power of these additional goals in the regular game environment.
Solo games on the other hand can’t provide such a competition. Therefore achievements can become pointless in these games. It’s nice to gather them – they are still providing positive feedback – but without the chance of comparability the achievements might get lost in space because there’s no real measurement.

This is, I think, one of the biggest problems if we try to add new goals to the real-world. Economic driving and reaching new records is fun and as already mentioned it provides positive feedback, but it’s due to the lack of comparability often pointless as well.
As long as additional goals are added to a shared environment, they are engaging through competition – as the gamification concept has already shown.
But how to keep all the personal achievements engaging? Creating a world-wide personal achievement portal, where everyone can post their recently earned achievements? How to compare economic driving among different car types? How to get comparability without having a common platform?

On the other hand, the satisfaction of positive feedback after completing a challenge can still be an awe experience and keep the engagement high. May be the comparability is just overrated.
And finally gamification of my own life means that I’m always on top of the scoreboards!

[1] Gee, James Paul (2007): What video games have to teach us about learning and literacy, New York.

Gamers: No fear of failure

This week: I read the book „Reality is broken“ [1]. Jane McGonigal gathered a lot of information about how computer games might change ourselves and improve our world. The author shows how computer games can solve real-world problems and suggests that computer gamers can become extraordinary problem solvers and collaboration experts.
This „finding of the week“ – due to lack of time – is a very short one and presents my special thoughts about solving a „certain problem“.

„We learn how to play by carefully observing what the game allows us to do and how it responds to our input. As a result, most gamers never read game manuals.“ ([1], p.26) This is one thing, gamers are really getting used to it. Often a game offers a short tutorial to teach them the most important facts: How they can move in the virtual world or how they can intertact with entities of the game. The user interface is often quite similar within a particular genre. Thus gamers getting used to certain symbols and their meaning.
During gameplay, gamers are playing from scratch: Principle of trial and error! If some way isn’t the right one, players are encouraged to try another one until they exhause the challenge. Only if they feel to be stuck forever, they start searching the internet for a possible solution of their particular problem.

This attitude also comes into play when gamers are using other types of software or trying to tweak their computers: They don’t bother reading manuals at first, they just begin with the search for known symbols in the interface of the software. Saving the current project is often illustrated with a floppy disk. A printer icon is in most cases the printing function. And if not … trial and error again.
Therefore computer gamers do often have a deep knowledge about computer related issues because they’ve already experienced a lot. They seem to be the perfect problem solver if a printer refuses to print.

Well, they probably are … but! … everyone can get this knowledge too. Gamers aren’t perfoming magic. They just take advantage of the trial and error principle.

To wrap things up: Gamers teach us to approach things without the fear of failure. And as long as it is related to the use of a computer, the undo-function helps a lot to noodle around. Except for formatting, deleting, placing magnets near hdds, any water related problems, etc.

This week: This time, it’s not about a paper I’ve read. Instead, I’ll share with you my charts which were created during some short training sessions with Adobe Illustrator.
The first one gives a short overview about different distribution channels of computer games. The second chart illustrates how the retention mechanism (mentioned in last weeks „finding of the week„) of buying reputation based items can keep players active.
This „finding of the week“ is all about (cool looking) charts. 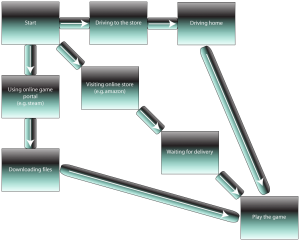 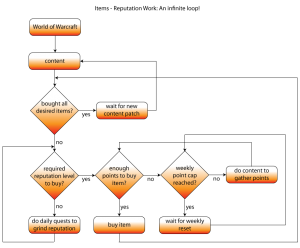 This week: I read the paper „If You Build It They Might Stay: Retention Mechanisms in World of Warcraft“ [1]. The authors investigated the retention mechanisms in WoW to keep players active. MMORPGs like WoW aren’t having a clear ending. These games are more simulating an active and living world with an always ongoing story. These open-ended games need to provide mechanisms to keep users playing and even paying: Most of these games are based on a pay-to-play or free-to-play business model to generate revenue over time. Pay-to-play requires mostly a monthly fee to be played. Free-to-play allows everyone to play without paying a fee. However players can buy fancy stuff or in-game goods for real money to enhance their gameplay experience.
This „finding of the week“ is all about the results connected with senior players.

The results of this paper [1] have shown that senior players have a lower stop rate of playing World of Warcraft (53% to 76%). Additionally they are even playing on a more regular basis than non-senior players.

Seniors have become an important target group: They have a lot of time, often live in financial comfort and want to spend their money [2]. Marketeers are already aware of this target group: A lot of advertisements are directly adressing elderly people. After all, they can become very loyal customers and therefore generate revenue on a regular basis.
Considering this, attracting seniors to MMORPGs can be an important business strategy.

Apart from the financial aspect, there are additional positive effects for elderly people playing MMORPGs: Elderly people may not be as mobile as they like to be and thus they can feel lonely and isolated from the world around them. By playing MMORPGs they have the opportunity to connect and to socialize with other people without the need of being mobile [3]. They can become a part of a social network and thus gain positive social experiences.
Furthermore playing computer games is an active task whereas other options like watching tv is just passive. Computer games even let people feel more productive and offer highly structured tasks to them [3].
Considering this, computer games can enhance the lives of elderly people and help them to feel more connected to the world around them.

In conclusion, if seniors feel accepted in the game, they can become very loyal customers. They even can enhance their lives by playing and thus socializing with others.

I think this system can be quite exciting in the near future. Maybe we can see some more of multi-generational guilds. These guilds can support a better understanding between generations by allowing every player of any age to play and to chat together.
At least, the anonymity will allow a coexistence of every generation: No one can estimate the age of a player by looking at his avatar. But being able to see other players will create a world of ambient sociability [3].

Or, what would be totaly awesome scenario: A senior guild is competing around world firsts. „Space Cowboys“ is becoming reality: „Raid Cowboys“!

[1] Debeauvais, Thomas; Nardi, Bonnie; Schiano, Diane J.; Ducheneaut, Nicolas; Yee, Nick (2011): If You Build It They Might Stay: Retention Mechanisms in World of Warcraft, in: FDG ’11 Proceedings of the 6th International Conference on Foundations of Digital Games, pp. 180 – 187.