This week: This time, I think about SpaceX’s successful landing attempt of a Falcon 9 booster.

One of SpaceX’s major goals is to reduce the launch costs by developing a reusable rocket that can fly multiple times. On Tuesday, December 22, SpaceX made a huge leap towards this goal as they managed to successfully land a Falcon 9 first stage on a designated landing site.

Two and a half minutes after liftoff from Cape Canaveral, the 156-foot-tall (48m) first stage booster separated from the second stage and flipped around in order to perform a deorbit burn and to change its trajectory back to a landing site near the eastern tip of Cape Canaveral. At this point, the rocket was flying at a speed of more than 5,000 kilometers per hour at an altitude of roughly 80 kilometers. Simultaneously, the second stage ignited its engine in order to accelerate its payload to orbital velocity. After the booster completed the deorbit burn, it began its decent to the landing target and slowed down through hypersonic, supersonic to subsonic velocities. During the descent, the first stage was controlled by four hypersonic grid fins which were extended after the deorbit burn was completed.

After two unsuccessful landing attempts of a Falcon 9 first stage on a barge in the Atlantic ocean, SpaceX decided to change the landing site to a Cold War-era Atlas launch pad which was converted to support the landing attempt. Less than 10 minutes after liftoff, the Falcon 9 booster extended its landing legs and successfully landed on the landing pad.

SpaceX’s achievement marks the first landing of an orbital-class booster that was on an actual mission to transport some communication satellites into orbit. The booster is now being examined by engineers and will likely be used for ground testing. However, it will probably not fly again, but future boosters might get refurbished for multiple missions.

This week: This time, I think about the Paris Agreement which was adopted by the UNFCCC members on 12 December 2015.

On 12 December 2015, the Paris Agreement was adopted by consensus by all of the 196 United Nations Framework Convention on Climate Change (UNFCCC) member parties. The Paris Agreement is the first international agreement to address climate change and to take action against global warming. All members promised to reduce their carbon output and to do their best in order to limit global warming to well below 2°C. 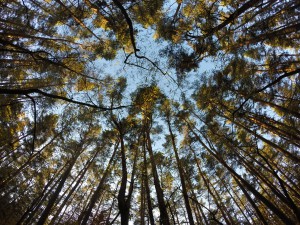 In general, the Paris Agreement is a first sign that the whole world recognizes the climate change and has the ambition to take action against it. The pact was even called „a turning point“ in the goal of reducing global warming and „a message of life“. Global warming is a global problem and can only be limited if all countries try to limit their emissions and to support alternative ways of generating energy. However, it is also a problem that can be addressed by every single person on our „Pale Blue Dot“ as even small changes can cause a significant effect.

Unfortunately, adopting the Paris Agreement is only the first initial step on a very ambitious road to a carbon free society. The next challenge of the Paris Agreement begins on 22 April 2016–Mother Earth Day–when it will be deposited at the UN in New York and be opened for one year for signature. It will only enter into force when it is ratified by 55 countries that account for at least 55% of global emissions. Furthermore, the Paris Agreement mostly consists of aims and not firm commitments and many items are only voluntary and not binding.

Nevertheless, the Paris Agreement is a first sign to everyone that we have to act now and change our behavior if we want to keep the Earth a beautiful place for future generations. We can change the world if we work together and start to encourage others to take action, too.

The transformation of a content creator to an institution

This week: This time, I think about the phenomenon that a creator of Let’s Play videos is regarded as a representative of a computer game.

Creating LPs is a special form of playing a computer game as the player records and commentates the gameplay. In general, the main goal of content creators is to share their gameplay with others and to entertain their audience with an exciting commentary. The viewers, however, occasionally start to regard the content creator as a central fixed point for the way how a computer game is meant to be played. This especially becomes obvious when viewers start to compare their own performance with the YouTuber’s performance. Although it might be entertaining to compare the own accomplishments with a YouTuber, it neglects the fact that the content creator has a completely different approach to play the game than most of the viewers.

On average, a content creator releases one or two videos about a certain game per week. Each of those videos has an average length of about 30 minutes and hence the content creator accumulates a total gameplay time of one hour per week. The viewer, on the other hand, mostly has a completely different approach and plays the game for a much longer time per week, thus resulting in a much higher experience in playing the game.

This week: This time, I think about the issues that are created by the assumption that the YouTube subscriber count is a measurement for quality.

Amongst other things, YouTube is famous for the huge variety of different content creators who publish videos related to computer games. The majority of those YouTubers create so-called Let’s Play videos that feature their gameplay which is enhanced with their commentary.

One of the most common ways to measure the impact factor of the content creators is to take a look at their subscriber count. Large YouTubers have more than 1 million, medium sized YouTube channels more than 100.000 and small content creators less than 100.000 subscribers. Although those large YouTubers reach a high amount of viewers with their videos, they are just a small amount of the total content creators on YouTube. The bulk of the videos that are created and uploaded to YouTube comes from the smaller channels.

Unfortunately, this method of categorizing YouTube channels led to the conclusion that the subscriber count is a measurement for quality and that only large and medium YouTube channels feature entertaining and good content. This, however, neglects three main factors that played a crucial role in reaching those high numbers. Most of those bigger YouTubers have started during the early days of Let’s Plays. At this point, the market was not saturated and it was much easier to gain the attention of viewers who subsequently formed the initial basis for a medium or large YouTube channel. Today, the market is saturated as many other content creators have begun to release their own videos and thus it is really hard to gain the attention of new viewers.

In addition, YouTube’s search function increases this effect as it ranks the search results by the amount of views and likes. In other words, YouTubers who already had a good initial basis of frequent viewers had a huge advantage over YouTubers who started during the last years as their videos are always shown on top of the search results.

The third factor is based on the skewed perception that only those larger YouTubers create good content and, as a result of this, game developers and other relevant players started decorate themselves with the content of large YouTubers. For instance, it is much more likely that a medium sized YouTuber gets a retweet on Twitter than a small content creator with only a few subscribers. This behavior creates an additional brickwall for smaller channels as getting announced by other relevant players is currently one of the best ways to gain new viewers.

This behavior can be even seen as a huge marketing mistake as smaller content creators can create content that is superior to the content of larger YouTube channels. In the end, game developers miss an ideal opportunity to advertize their products as they do not recognize the value of smaller channels. Furthermore, announcing the content of smaller channels would also help those smaller channels to grow and subsequently to reach even more users. This, in return, would help the game developers as more people would then be aware of their products.

In general, just taking a look at the subscriber count is a huge mistake these days as the whole YouTube market has changed within the last few years and huge subscriber counts are no longer (and never were) a measurement for quality. In addition, larger channels only remain large as the majority of the viewers does not recognize that there are more interesting alternatives available due to the flawed system. YouTube, game developers and other relevant players need to become aware of the opportunity that leveraging smaller channels can result in a higher return of investment than continuing with the current system of favoring larger channels only.