Preparing a community event for a small Minecraft server

This week: This time, I think about initial challenges of introducing a server wide community event.

Recently, I came up with an idea for a community event on a small Minecraft server. As the event has not yet started, I can not analyze its outcomes, but I like to start discussing a few of the challenges I encountered during the initial preparation phase.

Spreading the news. In order to have its full effect, the existence of a community event must be propagated to the current server’s population to raise their awareness. However, as such a gamified event should be fully integrated in the setting of the game, it is also important that the information are spread in a subliminal way. Therefore, the potentially best way would be to allow the server’s members to accidentially get in contact with elements of the community event that will ultimately provide them with a lead that an event is about to begin.

For this purpose, as the server is also used as a stage for video creation, I decided to introduce the community event in one of my videos. During the video, I will encounter the first signs of a server wide conspiracy which will become more and more prevalent as time progresses. This will be achieved by providing new indications of such a conspiracy at frequently visited locations on the server to give each member the chance of learning about the upcoming event.

Timing. Also, the timing of the initial steps of a community event is critical. The story should not progress too fast as this might result in the fact that some players might miss out on important steps. On the other hand, the time between two steps should not be too long as this might result in the problem that players do not see a connection between the individual steps. Therefore, more signs indicating an upcoming event will be released shortly after the initial video goes live and, after a few days have passed, more signs will follow to complete the community event’s introduction.

Inviting and involving all the members. Finally, it is important to invite everyone on the server to take part in the event. Therefore, some key players of the server will encounter individual intermediate events that will personally involve them in the event’s narration. The idea behind is that the members will start to discuss what happened to them, thus spreading the news about the upcoming event. Hence, it is also necessary to monitor the communication in order to adjust the story’s progression accordingly.

The first strike. Eventually, after the initial introduction is completed, the community event will begin with the first major event that will put all initial signs into perspective and allow the players to draw initial conclusions.

This article is the first part of the analysis of such an event which will be continued as the event progresses.

This week: This time, I think about the exciting experience of developing a computer game from scratch and seeing it become reality.

As with any other long term project that aims at the realization of a concept, working on a computer game and seeing it grow over time is an amazing experience. Recently, I realized how much the learning game I have developed as a demonstrator for the gamification of learning has changed over the last year.

Since I started working on this project at the end of summer 2013, it went through four important stages. The first stage was all about developing a basic concept for a computer game that encodes the desired learning content using game mechanics. After about six months of work, the first concept was finished and the project moved on to the next stage: the concept’s realization.

Another six months later, the development of the learning game’s first version was finished and I was able to conduct a first preliminary study to examine its usability and training outcome. The evaluation of the results revealed that the training game helped players to develop a better understanding for the learning content as well as to practice the knowledge due to repetition. Thus, I had a working basic demonstrator for the gamification of learning that had the potential to support all of our hypotheses. 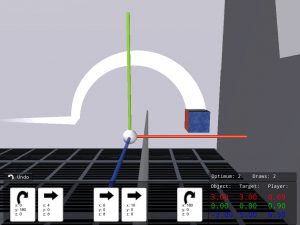 After this first successful test, the serious game entered its third stage, received minor improvements based on the outcome of the preliminary study and subsequently was tested in a full study which took place summer 2015. The study’s results revealed a positive effect on the learning outcome and an increased motivation on the side of the participants.

This successful outcome showed the usefulness of the serious game and thus the project entered the fourth stage during which the basic version of the game received a completely new style and many more functions that increased its usability as well as its motivating effects. By now, the overhaul of the demonstrator is almost complete and has resulted in a ‚real‘ computer game that has only a few remaining similarities with its initial version. 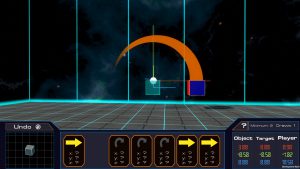 In two weeks, the project will enter its fifth stage as the improved game will be tested in a similar study, again. I am already excited to see the results that will hopefully reveal an even higher positive effect on the learning outcome.

Looking back on all the work that went into this project and seeing the results makes me really happy. It is such an amazing experience developing a computer game from scratch and seeing huge changes with every end of a stage.

The gamification of programming

This week: This time, I think about the way how Human Resource Machine teaches players the basics of programming.

Algorithms and loops are the key concepts of programming as they provide methods to systematically carry out operations until a certain condition is reached. However, correctly developing algorithms and repeating them with loops in order to carry out a given task is often hard to understand and requires a lot of practice. In order to successfully transform a task into an algorithm, a user has to analyze the task and segment it into single steps that subsequently can be sequenced as an algorithm.

Recently, I played the computer game Human Resource Machine that challenges a player with small tasks that can be solved by programming a little office worker. For instance, one puzzle challenges the player to grab every numbered block from the inbox and to put it into the outbox. However, if a number is negative, the player must remove its negative sign first. This puzzle requires the player to grab a block from the inbox, to check its sign and, dependent on the result, put it into the outbox or change its sign before putting it into the outbox. For this purpose, the player has several commands, such as ‚grab from inbox‘, ‚jump if negative‘, ‚jump‘, ’subtract‘, ’store‘ and ‚put into outbox‘, to program the little office worker in order to carry out the developed algorithm. 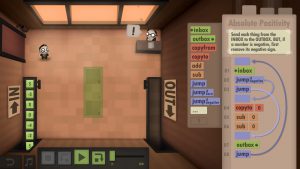 Aside from correctly developing an algorithm, it is also important to keep the programming code as short and efficient as possible. This can be achieved by looping certain parts of an algorithm and checking if certain sequences can be jumped. These two goals are also a part of Human Resource Machine as the player can achieve bonus goals by not exceeding a certain amount of lines or reducing the amount of steps the little office worker has to carry out to a minimum.

This week: This time, I think about how Let’s Play videos can be used to address serious topics, thus resulting in edutainment content that is appealing to a younger audience.

Let’s Play videos (LP) usually document a player’s gameplay and enhance it with an additional story arc due to the player’s commentary. Depending on the type of the game, the player’s story arc can also be used to tell the viewers a unique story. This is mostly the case when an open world sandbox game is being played as such a game can act as an empty stage for the player’s performance.

For instance, the sandbox game Minecraft provides the players with a procedurally generated environment that they can explore or use as a building site to construct impressive buildings. Independent of the player’s approach, each play session will be unique and allow the players to tell a unique story. Furthermore, content creators can use the game as a movie set and produce exciting movies with the help of video editing.

However, utilizing a computer game as an empty stage also offers the opportunity to produce edutainment content. During the gameplay, the content creator can discuss serious topics, thus delivering the content in a way that is appealing to a younger audience and computer game players in general. Hence, they will pay more attention to what the content creator is discussing and potentially start to get interested in the topic being thematized.

Ultimately, this approach can help to raise the general awareness for important problems as it delivers the content in a way many young people can identify with. In addition, watching a LP can be more immersive than watching a small news report on TV.