This week: This time, I think about the effects of a simulated surveillance. It is very interesting to reveal dark secrets about fictive persons but it als raises a question about data security.

The internet is a great and important tool these days. Users can retrieve information about a certain fact, buy things from all around the world, enjoy fascinating movies as well as photographs, and connect with other people. However, every time we upload new information to the internet, we leave behind traces revealing our personal life. In addition, some privacy settings might get changed by service providers or a bug occurs in the platform. Suddenly, the entire world has access to previously hidden data.

One merely has to follow a person’s social media profiles and perform some targeted search requests using google to find these information. Then, by connecting the dots, it is possible to create a comprehensible profile when enough data was uploaded. While this rarely is done with harmful intentions, it can also reveal information that should not be publicily available. 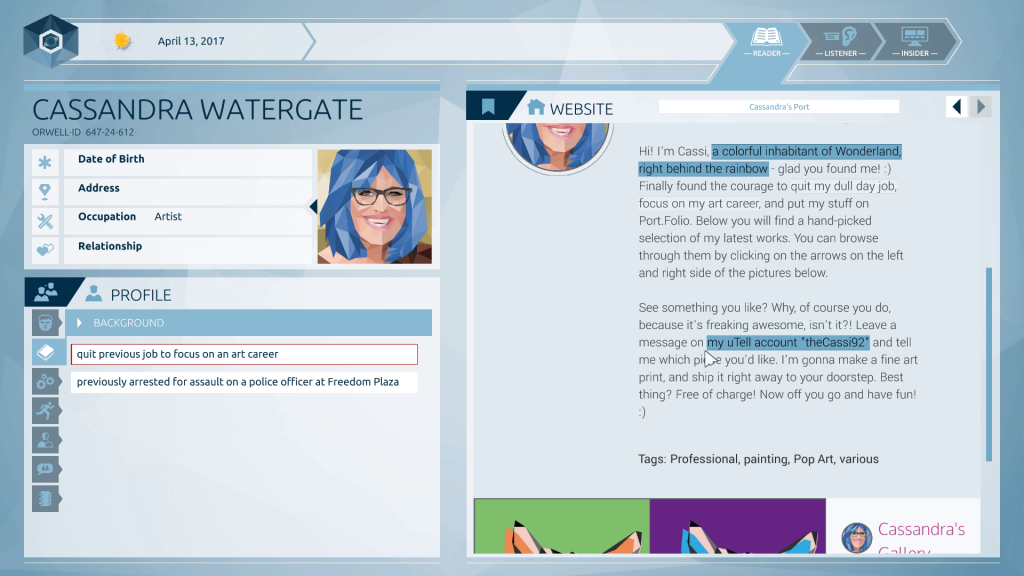 Another dangerous scenario is when a government uses the internet to implement a surveillance of the nation’s citizens. In such a case, some missleading statements on a social media platform might already lead to wrong assumptions and even to further investigations. Recently, I started playing Orwell which discusses this problem.

The player is put into the role of an investigator who is searching on the internet for clues and information about a fictive nation’s citizens after a potential terror attack. Clicking through the fictive websites, invading a user’s private chats and uploading information to the „Orwell“ database gave me a pretty bad feeling. After uploading them, they were used to generate a comprehensive profile and were interpreted in order to find connections to additional information sources.

Can I be traced in a similar way? Do intelligence agencies‘ databases already feature a profile about myself? Although I just played the first 30 minutes of Orwell, it made me realize how much we reveal about ourselves by utilizing the internet.

In the end, Orwell is a very interesting game that challenges a player with ethical problems thus training ethical decision making. Despite these ethical questions, the game still immerses a player and evokes a certain desire to continue the surveillance. One cannot deny a dark interest in finding out more about the fictive citizens.

This week: This time, I think about the technological differences of a 22-year computer game. The graphics look old, but the gameplay itself can still be successful today.

Currently, I am watching a Tomb Raider (1996) Let’s Play. It brings back great memories of playing this game back in the days and being totally amazed by the game’s atmosphere. Everything seemed so realistic and novel to other games I played at this time. Thus, I always was highly immersed in the gameplay and kept it in a very good memory.

Now, more than 20 years later, the game looks quite old in comparison to current state-of-the-art games. Of course, this is not a surprise. One can easily spot design decision that most likely were made to achieve a higher performance or simply were not possible back in the days. Amongst other things, the view distance was limited, 3D objects were represented with 2D graphics that always face towards the player, and the entire virtual environment looks relatively simple.

Despite those graphical and performance related limitations, the gameplay itself would still work very well today. Most game mechanics are still used these days in similar action-adventure games challenging a player with puzzles and short fights. Exploring environments full of traps, solving puzzles by finding objects as well as activating devices, and discovering hidden secrets. As a result, by just watching the videos, I got immersed in the gameplay and forgot about the visual limitations, again.

Realizing this was a very interesting observation to me. It is another example for the change in the perceived realism of state-of-the-art technologies. We always experience current technologies as very exciting and realistic and rarely recognize the change. The technological advancements are a procedural process. However, when suddenly looking back into the past, we suddenly recognize how much things have changed.

I’m excited to see what will be possible in 22 years from now on!

This week: This time, I think about the importance of communicating all information directly inside of the virtual worlds in the case of a simulation game. Adding an additional visual information layer above the simulation reduces a player’s acceptance.

Simulation games target a realistic simulation of a specific activity, e.g., driving a race car or flying an aircraft. They encode real world principles in their game mechanics to achieve similar requirements to the real world activity and to provide an authentic visualization of the gameplay. Also, encoding the underlying principles is important to accurately simulate the effects of a player’s actions. In the end, simulation games target the provision of the illusion to actually perform the presented activity.

Aside from encoding the underlying principles, an effective simulation game requires well-designed interaction techniques and a believable user interface. Interaction techniques seem more natural and work best when they achieve a high degree of authenticity. This, of course, also depends on the available hardware. For instance, controlling vehicles only using a keyboard will not be as natural as using a steering wheel or a joystick. Thus, to yield a high believability, it is important to implement techniques that closely mirror the real world interaction techniques.

Providing a believable user interface mostly is straightforward as designers merely have to remodel the cockpits of the simulated vehicle. In this way, important information, such as speed, remaining fuel, and altitude, are communicated in the same way as in the real world. Such an integrated interface that provides information directly inside of the 3D virtual environment is called a diegetic interface. These interfaces seem more natural as they avoid providing an additional visual layer, i.e., a non-diegetic interface, on top of the actual information. 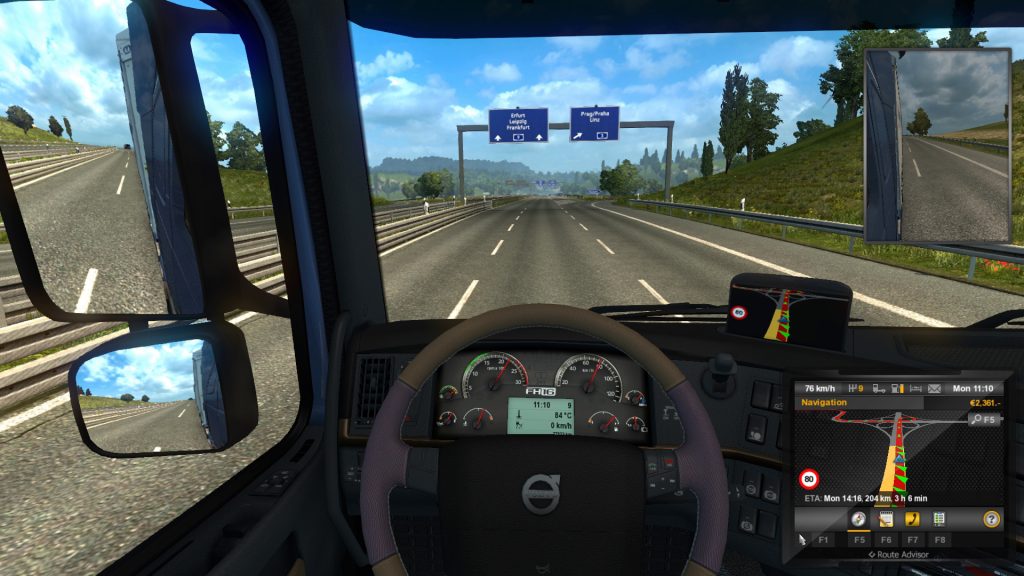 The GPS interface (lower right corner) is layered on top of the simulation. This breaks the immersion and reduces the believability.

This also is critical for information and menus providing access to further gameplay elements. While finding and implementing methods to integrate these elements in a diegetic way might be more complex, it reduces a player’s irritation and enhances the believability of the simulation.

For instance, Euro Truck Simulator 2 requires players to activate a non-diegetic GPS interface to find information about the remaining distance, the destination, and the status of the on-going contract. This causes a high degree of distraction as this GPS then is layered on top of a truck’s cockpit. As a result, the immersion of sitting inside the cockpit is reduced. A better solution would be to communicate these information by directly integrating the GPS into the cockpits. This would still provide access to all relevant elements while avoiding a negative effect on the believability.

In conclusion, providing diegetic interfaces enhances a user’s acceptance of the simulation. The provided information are then a part of the game and not communicated via an extra layer that does not exist in the real world.

This week: This time, I think about how computer games show us how capable the human body is when the gameplay takes place under challenging conditions.

Playing computer games is a very demanding activity. Depending on the genre of the game, players are challenged to make fast decisions, to immediately react to events, to monitor several task-relevant information at once, and to generally stay focussed. These requirements are also found in highly demanding professions like airplane pilots and rescuers working in any kind of emergency response service.

While gaming takes place in a safe environment allowing for an experimental learning as even death is reversible, the real world professions provide no room for errors. As a result, a constant training and frequent assessment of one’s performance is critical to ensure a high degree of safety. This especially becomes crucial when the environmental conditions strongly divert from the norm. In such a case, it often is very impressive to realize what the human body is capable of.

Although not working in one of these professions, I can observe this phenomenon every year during the summer. With the ongoing climate change, each new summer is more demanding than the last one. This year, the summer only took a few breaks since May. Hence, I am challenged to create Let’s Play videos under very hot conditions (36 C and more) for quite some time. Still, I am all the time surprised that I manage to correctly analyze the gaming action and simultaneously provide a decent commentary.

This can be explained with gaming flow, a state of mind when the player is completely immersed in the gameplay. While being in flow, the awareness for the surrounding world and even the own body is directed towards the gaming action. As a result, the demanding heat is no longer recognized as a disturbing factor.

More importantly, this observation shows that the human body can even work under very challenging conditions when we are in the right mindset and fully focussed on a specific activity.